CBRS has become an ideal platform for the roll-out of Private LTE infrastructure. Years ago industrial facilities, mobile workforce, government or other collectives which depended on reliable mobile communications to satisfy mission critical tasks relied on ‘Trunking’ or Tetra networks to do the job; today Private LTE is their state-of-the-art successor. With Private LTE, organizations can establish secure, mobile broadband communication networks that are owned and operated by them. The advent of CBRS has led to a boom in Private LTE deployments due to the low cost of radio spectrum acquisition and the fact that CBRS networks are mostly LTE-based. 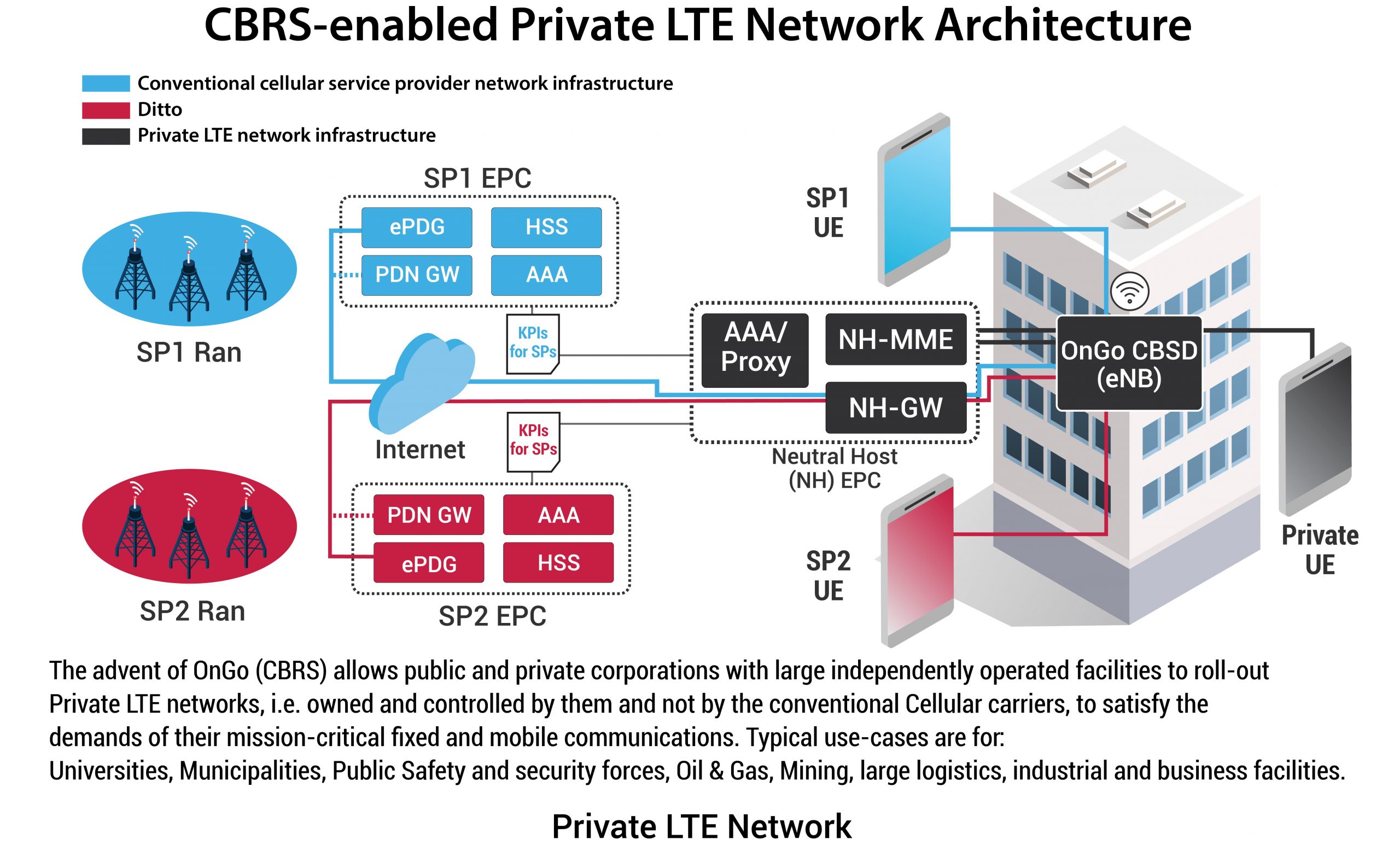 Organizations with critical ‘push-to-talk’ communication needs are generating strong demand for Private LTE networks in the CBRS band. Some of the emerging use-cases are for:

Many existing businesses and a substantial number of start-ups are already working on the Neutral Host opportunity within CBRS. The underlying value proposition is based on the fact that as we have progressed from 2G to 3G and now 4G networks the very nature of broadband signal propagation signifies that the cellular carriers are challenged to offer good quality service indoors.

One of the many applications of CBRS/OnGo technology is in solving the indoor cellular challenge. According to the U.S. Census, there are over 85 billion square feet of floor space across millions of commercial buildings in the United States. While mobile coverage in some of these indoor spaces is adequately served by “outside-in” coverage from nearby macro towers,
one can find many venues with poor mobile coverage and insufficient bandwidth, resulting in very poor user experience. This indoor challenge is exacerbated by modern building materials such as low-emissivity glass. While good for the environment, the “low-e” glass prevents outdoor cell signals from penetrating inside buildings. Another looming challenge is the proliferation of higher frequency spectrum use for 5G such as the 3-4 GHz mid-band and millimeter wave bands, which will further reduce the reach of outdoor cell signals. Higher frequency signals propagate shorter distances than lower frequency signals. All these factors lead to the conclusion that the outside-in coverage from macro towers will not be enough, and that in-building wireless infrastructures need to be deployed indoors. Deploying in-building wireless systems in all the buildings is a daunting and expensive proposition! With limited capital expenditure budgets, the Service Providers (SPs) prioritize their “indoor” infrastructure spending on “high-value” locations like stadiums (top end of the inbuilding wireless market as shown in Figure 2). Large public venues like stadiums are strategic to SPs as poor user experience during major events like the Super Bowl could cause customer churn.
The SPs want to reduce churn, so investing in indoor systems such as Distributed Antenna Systems (DAS) at these strategic locations can easily be justified. However, the vast majority of generally smaller venues with lower traffic profiles are harder to justify. For those, the SPs hope that their nearby macro towers can provide sufficient outside-in coverage. These lower-tier “mid-market” venues including hotels, hospitals, high-rise multitenant buildings, etc. require the multi-operator capability that DAS offers, but can’t afford the relatively high cost of DAS installation and complex business arrangement associated with securing signal source from large operators. While small cells offer built-in signal source, they are operator-specific in
nature. Thus, they require multiple small cell installations per site, which quickly adds to the overall cost. The mid-market comprised of hundreds of thousands of buildings requires a lowcost, easily sourced, multi-operator RAN solution that mirrors Wi-Fi-like simplicity in business model at a reasonably low total cost of ownership. Excluding indoor spaces with adequate coverage from outside-in and “private” spaces that can be addressed via operator-specific small cells, Mobile Experts estimates that over 30 billion square feet of commercial indoor spaces in the U.S. are ripe for the “mid-market” multi-operator indoor solution.

The large gap between the top end of the indoor cellular market (Figure 2) directly served by the Service Providers (SPs) and hundreds of thousands of smaller, low-traffic (“mid-market”) venues is stark. There is a growing need for a Neutral Host Network (NHN) operator to bridge the gap between very large projects with direct SP involvements and large numbers of smaller projects that are too small for SPs to consider, but too complex for enterprises to handle on their own. This gap in serving the growing needs of the mid-market indoor venues requires a low-cost solution that removes complex business models associated with the multi-operator support. With OnGo, the overall system cost is lowered, and the business model is simplified. With the CBRS band as inherently neutral spectrum across all operators, only one OnGo small cell can serve all operators instead of installing multiple, operator-specific small cells at each site. With the full NHN ownership of Core, RAN, and spectrum (the CBRS band) of indoor systems, the commercial arrangement amongst venue owners, NHN operators, and SPs is greatly simplified as follows:

• SPs can enable indoor cellular coverage and access for their subscribers, who have NHNcapable devices, without direct capital investment at every single venue through commercial agreements with a few select NHN operators while maintaining total control of subscriber relationship through USIM device provisioning (and even SIM-less NHN).

• NHN operators can address the large and growing indoor cellular opportunity at the midmarket venues through network-based infrastructure services to SPs; this may further open up value-added service opportunity to building owners and enterprises;

• Building or venue owners can provide indoor cellular services to tenants or consumer through NHN operators, thereby increasing the value of underlying physical assets. Otherwise, outsourcing the complexity of installation, working with large SPs, and ongoing maintenance of indoor cellular systems may be too burdensome for most venue owners with IT/Telecom resources.
This “win-win-win” arrangement through an NHN operator with OnGo greatly simplifies the business model among the key stakeholders. The full ownership model of network infrastructure including spectrum allows for a clear roaming relationship between SPs and NHN operators. Moreover, the shared infrastructure model through an NHN operator allows more mid-market venues to be addressed and served economically by sharing indoor cellular systems across multiple SPs.

The Mechanics of Neutral Host with OnGo

As discussed previously, the role of a Neutral Host Network (NHN) operator is to provide infrastructure sharing for cost savings at certain venues where it doesn’t make sense for each Service Provider (SP) to deploy and manage a separate owned RAN. For smaller indoor venues, this is truly the case. Here, an NHN operator can step in and provide shared infrastructure to
lessen the burden for participating service providers. Instead of spending months of negotiation for site access and an appropriate business model with each venue owner, SPs can enable “five bar” mobile service with a commercial agreement with an NHN operator for access to many indoor venues where mobile coverage is poor or seriously lacking. Extending the “tower” business model, SPs can continue their primary focus on core RAN network performance outdoors and at a few key strategic locations, while leaning on NHN operators to build out indoor RAN in the “mid-market” venues where shared economics makes sound business case.

With a full ownership of integrated Core and RAN networks, including frequency spectrum via the CBRS band, an NHN operator essentially becomes the network operator of indoor venues; similar to major SPs running large mobile networks – albeit at a much smaller scale.

What are the key components of a Neutral Host Network (NHN)?
A NHN is made up of the following Core and RAN network elements:

• NH-MME (Neutral Host Mobility Management Entity): NH-MME is the key control node in the NH EPC. It is responsible for tracking and authenticating subscriber mobile devices. It also keeps location information and chooses which gateway to associate user devices during registration process.

• Local AAA/Proxy server: Depending on which AAA server the UE device credentials are associated with, local or remote AAA server is responsible for authentication, authorization, and accounting of data services.

How do you roam from a Service Provider Network to NHN?

Roaming onto a Neutral Host Network (NHN) leverages the same cellular roaming principles and procedures as roaming onto another operator’s network. A UE device first discovers a CBRS OnGo network by scanning the CBRS frequency band for a network broadcasting a CBRS-I; the device then determines if the network supports Neutral Hosting and reads the list of
Participating Service Provider IDs (PSP-IDs). (Note: If the service provider has a commercial roaming agreement with the NHN operator, then the NHN would be broadcasting the participating SP’s network identifier PLMN-ID5
in its list of PSP-IDs.) If the device is preprovisioned to access any of the listed PSP-IDs, it would then begin to attach and authenticate to the NHN CBRS/OnGo network to roam. As a part of the NHN commercial arrangement, the service provider is responsible for pre-provisioning one or more corresponding CBRS identifiers, CBRS-I onto device USIM credentials so that its “NHN-capable” devices can discover and attach to allowed NH networks. It should be noted that the CBRS Alliance in close collaboration with ATIS, which manages IMSI6 resources in the United States, to assign IMSI identifiers for the CBRS/OnGo use case. Once a UE device has selected or roamed onto an NHN, the data connection between NHN and SP can operate in either “trusted” or “untrusted” mode. In “trusted” mode, an NH-GW connection to the participating SP’s PDN-GW uses the standard 3GPP interface – specifically, the STa interface for UE authentication and the S2a interface for PDN data connection. In “untrusted” mode, a NH-GW connection between UE and SP network services is handled through secure IPsec tunnel via the Internet to SP’s ePDG which manages interworking between the SP’s EPC and untrusted non-3GPP networks such as Wi-Fi or NH CBRS indoor RAN.

What is required of user device (UE) for neutral host roaming?

Besides the obvious need to support the CBRS band 48, an “NHN-capable” UE device contains a list of allowed CBRS networks (CBRS-I / NID) that it can roam onto along with PLMN-ID of Service Provider (SP) which provisioned the device. The UE must be capable of recognizing NHN CBRSI’s in SIB1, then reading PSP-IDs in SIB17, and finally performing NHN authentication per CBRS Alliance specifications. For a basic NH operation, a NHN-capable UE device handles data connection all on the SP network or all on the NHN. In more complex cases (e.g., VoLTE call on SP network and Internet data access on NHN), the NHN-capable UE device may maintain simultaneous data connections on the two networks. Furthermore, in some cases where a4 A CBRS-I can be a Shared HNI or the NHN operator’s own PLMN-ID. IMSI (International Mobile Subscriber ID) is a 15-digit unique identifier for each mobile user device. For CBRS/OnGo use case, the 9-digit mobile subscriber ID is further partitioned into 4-digit IMSI Block Number(IBN) and 5-digit User Identification Number (UIN) resulting in 10,000 blocks of 100,000 IMSI’s.

A device is expected to roam between two different CBRS networks (i.e., different CBRS-I and CBRS-NID), the policy for attach, mobility, and other pertinent procedures are configured in the UE device.

While there are multiple use cases and applications
that drive the market, the Neutral Host Network (NHN) operation of indoor cellular systems provides a major market opportunity for service providers, venue owners, enterprises, and NHN operators alike. With OnGo, the NHN operators can address the huge “mid-market” indoor cellular market opportunity that has not been sufficiently addressed to date. With the CBRS
band as natively “neutral” spectrum for indoor cellular access, the NHN with OnGo has the potential to address this need. OnGo opens up the opportunity for the NHN operators to provide low-cost, multi-operator indoor cellular systems to a vast number of “mid-market” venues and simplify the business models for the service providers, venue owners, and enterprises.